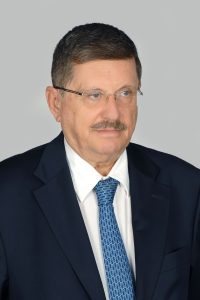 The founder of the Law Firm, Stratis Karvelllis, has a successful service of 40 years as an attorney-at-law, is a graduate of the University of Thessaloniki and a Lawyer at the Supreme Court. He has been a head of the legal departments of banks and a legal advisor to large commercial companies.

Between the years 1983-1985 he was a lawyer and legal advisor of the Bank of Macedonia & Thrace and head of the bank’s legal department in Athens.

For many years, he was a legal advisor to the VARVAKEIO FOUNDATION and a member of the three-member management committee of the “NEW CORINTH CANAL” company as a representative of the State (the canal shareholder structure being the State and the National Bank of Greece).

He has been and continues to be the legal advisor of many important medical and other companies, with extensive experience in public tenders and contract law.

He has been a legal advisor to trade unions of large banks (EUROBANK ERGASIAS, PIRAEUS, ALPHA BANK) and Pension Funds (TAPILT.AT—Fund for Mutual Assistance of the Employees of Ioniki-Laiki Bank and Other Banks—etc.).